In August 1966, the North Edmonson Water District was created to serve all of the county west of Nolin River and north of Green River with Roger Rich, Gilbert Webb and Haskell Lane as commissioners appointed by County Judge John H. Blanton.

The South Edmonson Water District was created to serve all of Edmonson County south of Green River, with the exception of the city of Brownsville and Mammoth Cave National Park. Judge John H. Blanton appointed as commissioners Benton Skaggs, Marvin Moody and Ray James.

In March 1967, the North and South Districts were consolidated to form the Edmonson County Water District to serve all the county west of Nolin River, south of Green River (with the exception of the City of Brownsville and Mammoth Cave National Park), and north of Green River, and a portion of Warren and Grayson counties with Ray James, Roger Rich and Marvin Moody as the commissioners.

The consolidation enhanced the possibility of obtaining funds to build the water system and improve the overall management and operation of the system.

On November 12, 1968, upon recommendation of the Engineer, the Commissioners rejected all bids, modified the Plans and Specifications and rebid the project.

Meetings were held at the county agent’s office, local banks, or the Chevrolet building until September 1970, when the Commissioners rented an office in Brownsville.

The Treatment Plant and lines were completed in November 1970. Some customers started receiving water at that time; however, other customers did not receive water until late Spring 1971.

On June 6, 1972, the commissioners, Engineers, and FmHA officials met to discuss the need to extend water lines to other customers. September 6, 1973, a Letter of Conditions was received from FmHA. February 26, 1974, the Letter of Intent to meet FmHA Conditions was signed. The process of signing up customers and obtaining easements began, along with advertising for construction bids and Sale of Bonds. FmHA bought the $586,000 worth of Bonds and Grant of $40,000 was obtained from FmHA. The customers began receiving water in January 1975. The project added approximately 30 miles of lines, and 2 tanks. That brought the total number of customers to 978.

An application was made in the summer of 1976 funds to upgrade the Brownsville approximately 70 miles of lines, 4 pump stations, build 3 tanks which would serve approximately 800 additional customers, and to build a new office building.

A Letter of Conditions was received from FmHA on March 15, 1977, with $931,000 Grant. After a long battle to get the needed customers signed up, bids were opened on March 1, 1978. Bids were more than $1,000,000 over the approved amount of money. After numerous phone calls, several meetings, and modifying the project, a new Letter of Conditions was received from FmHA March 24, 1978, with $1,516,000 loan and a grant in the amount of $1,414,300. At this time the 5th Magisterial District was annexed into the Water District. After proper approval was received, the contracts were awarded on May 25, 1978, and construction began shortly thereafter. Customers began receiving water in January 1980. Brownsville Treatment Plant after 1 million gallon per day upgrade. 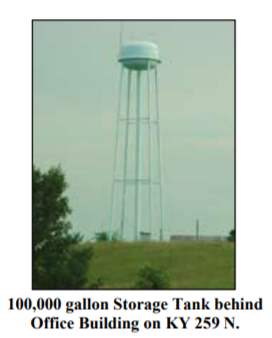